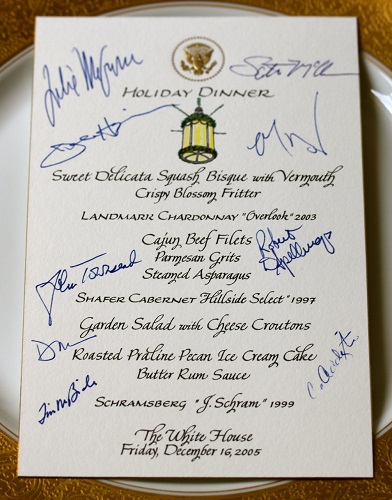 Some people love to hear about the tiniest details of formal entertaining, and I’m happy to oblige.  At a seated dinner at the White House a guest may encounter social traditions that may be unfamiliar to them:

1.)    Escort Cards and Placement: A little envelope with the guest’s name will be presented to each person as they arrive.   Inside they will find their table assignment.  At this point, guests usually begin comparing notes on where they are seated, wondering if Table One means they will be at the President’s table (not necessarily), and sometimes fretting when spouses are not seated together.  It is traditional to seat two people together if they are in a relationship, but not to seat married couples together.  Personally, I think it is silly to seat married couples together.  After all, they can have dinner with each other every night of the year.  Wouldn’t it be more fun to meet new and interesting people at a dinner at the White House?   Some people, however, are not comfortable sitting at a table without their spouse, and will object to their seat.

This is where the issue of placement, the French word for table seating, becomes important.  The Social Secretary, and more importantly, the First Lady, will have expended time and thought on the seating arrangements; it is not for guests to change them.  If you do, it will be noticed and remembered.  Changing one’s seating by moving place cards around is the ultimate faux pas.  It will confuse the seating for other innocent guests, and generally create an animosity for the place card-switcher that cannot be worth the trouble.

2.)   Fingerbowls: date back to a time when dinner was messy enough to require a little hand-washing in between courses.  This doesn’t happen much anymore, but its use has carried over to modern times.  After the last course before dessert has been cleared, diners are presented with a glass bowl of water resting on a saucer, usually with a fragrant leaf or flower petals floating in it.  There will be a piece of linen resting between the saucer and the bowl, and the dessert silver will be placed on either side of the saucer.   (We didn’t use fingerbowls very often at the White House when I worked there, because people sometimes didn’t know what to do when confronted with them, and the last thing we wanted was make our guests uncomfortable.) At the White House, the dessert fork and spoon are delivered to a guest on a saucer, instead of being a part of one’s place setting.  One should remove them from the saucer, fork on the left, spoon on the right, in anticipation of dessert.  The guest should dip his fingers into the water, wipe his hands on the napkin on his lap, and slide the saucer and bowl up and to the left, to indicate to the butler that he has finished with it.

It’s not unheard of for a guest to raise the fingerbowl to their lips and drink from it, and the best thing to do in that situation is to look away and change the conversation.  I’ve heard tales of the ultimate good host, upon seeing his guest drink from a fingerbowl, raising his own fingerbowl and drinking from it as well, to put his guest at ease.  That is certainly game, but not necessary.

Place card Holders:  These are the little golden eagles that hold the place card of each guest.   People seem to think they’re souvenirs, and they started disappearing so fast at dinners that the butlers had to start clearing the holders off the table before dessert was served, so guests didn’t pocket them.  Your place card and menu card are souvenirs; the holders are government property.

Signing Menu cards:  It is common at the White House for guests to sign each other’s menu cards at the end of a dinner, as a memento of who was at their table.  It’s a simple process: a guest writes their name on the card, passes it to the person beside them to sign, then signs the cards of all the other people at the table, who do the same.  It’s nice, years later, to look back at the signed menu card and be reminded of the people you sat with that night.  It’s a nice tradition for any formal dinner.