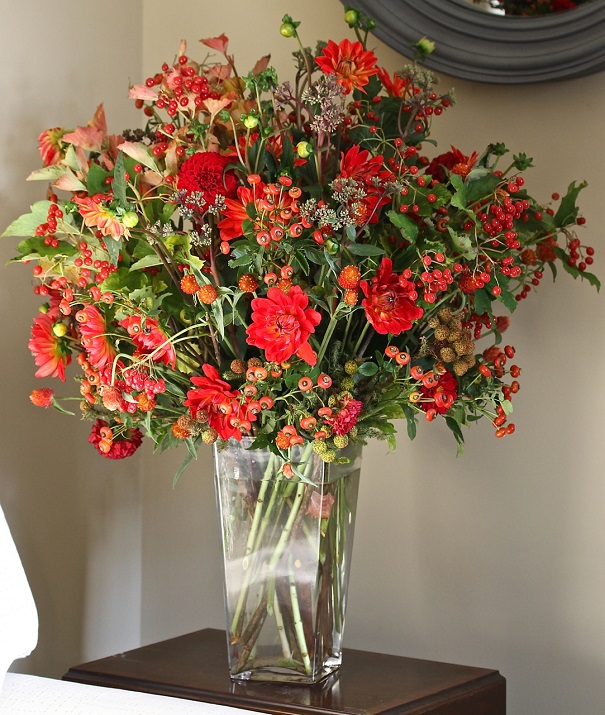 As the season turns, late summer flowers give way to seeds, pods, and other floral features of variable textures – all of which I’m itching to work into more natural floral arrangements. There’s nothing like a few branches of ripening blackberries or a branch of crabapples tucked into a fall bouquet to make it pop. There are so many varieties of fruiting plants available now that can’t be found at other times of the year. The first arrangement features two of my favorite things – red viburnum berries and rosehips (rosa rugosa). They have such vibrant color and visual interest that you almost don’t notice the flashy orangey-red dahlias or the gomphrenia in the bouquet. I added red sedum and red and green berzilia berries to fill out the arrangement. For an entry hall arrangement, I used asclepias pods (commonly known as monkey balls). One ten-dollar bouquet filled up this big vase and lasted almost a week. The little white flowers lighten the look of the asclepias, and the exotic pods command the eye.

And just when I thought I had everything arranged, I realized I was short a bouquet for the coffee table. There’s not much in my garden by this point in the year – a random mixture of annuals and a few flagrantly spreading herbs – and one variety of green hydrangea that blooms in small flowers continuously throughout the year. They’re nice, but not flashy. To give them texture, I picked a number of the leaves and spiked them throughout the arrangement to break up the monotony of the rounded blooms, which also introduced another shade of green. By this point in the year there’s no reason not to raid the garden, and bring what’s left of the good stuff indoors to be enjoyed.