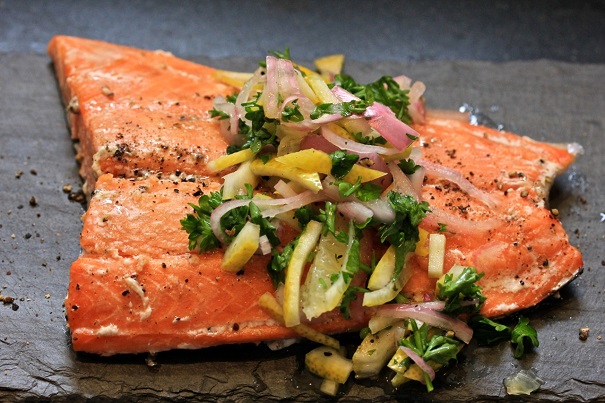 When my kids were young, they were deeply suspicious of any meat that wasn’t chicken. It didn’t matter what it tasted or looked like; chicken was fine and anything else wasn’t. So whenever I cooked salmon, I referred to it as “sea chicken,” and they ate it happily for years, until the younger one got into a vocal disagreement with a visiting playdate friend who recognized a salmon when she saw it. I dissembled with a not-very-convincing “potato, potahto” response that only left her friend thinking I was some kind of an idiot who didn’t know fish from fowl. Eventually, like the tooth fairy, the reality of salmon became clear and the girls took it with much better grace than they did the news about the tooth fairy. In my zeal to make the tooth fairy experience extra special I had taken to writing teeny notes from the tooth fairy on stamp-sized pieces of paper when they lost a tooth. The girls were thrilled by this personal correspondence from a real live fairy, but when it was time to tell the truth about the tooth fairy, those notes were produced as Exhibit Number One for why I HAD to be wrong when I finally admitted that sadly, there was no tooth fairy.

Alice was fascinated by fairies, and noticed that the tooth fairy and Santa’s elves (also prolific teeny note writers) had the same handwriting. She asked me why that was, and I quickly said that they’d gone to the same calligraphy school. She asked if she could go to that calligraphy school too. And I said, “Let’s learn calligraphy now! You don’t need to go to their school!” And on this went until the tooth fairy became far too real. I overdid it on the make-believe and then had to walk it back – and I’m not sure Alice doesn’t still believe in the tooth fairy.

But back to the salmon. We still try to eat salmon regularly, and I like this recipe, which was originally created by Alice Waters in her Chez Panisse Cafe cookbook. It’s for a slow-cooked salmon with just a little olive oil, salt, pepper, and parsley, served with a Meyer lemon relish. Since Meyer lemons were not available at the grocery, I used regular lemons and trimmed the pulp very closely to the skin of the lemon to get a similar result. This makes a beautiful presentation, with the colorful lemons and shallots glistening on the oh-so-tender salmon in a tart and tangy accompaniment to the fish.

I hope you’ll give this a try – it’s simple, easy and delicious!

Prep time: 90 minutes for salmon to cook, 10 minutes to assemble the lemon relish