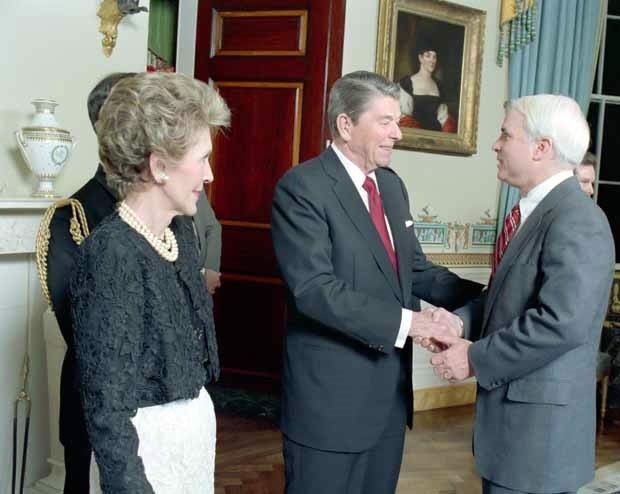 While a receiving line is usually only seen at a wedding or engagement party, we rarely had an event at the White House without one.   A receiving line consists of the host and hostess – and a guest of honor if there is one – standing at the entrance to the party to greet the guests.   And since the invention of the camera, the receiving line at the White House has taken on Cosmic Significance.  A photo with the President is what guests want above ALL other things, and it doesn’t matter if they’ve had their picture with the President many times.   Guests who are supporters of the President point to their photo and say, “This is how CLOSE we are!”  And those who didn’t support the President point to their photo and say “This is how IMPORTANT I am!  I got invited to the White House and I don’t even like the guy!”

When I first came to work at the White House, the receiving lines snaked all over the State Floor, so that people couldn’t get around the party.  It troubled Laura Bush that her guests were spending so much time waiting in line instead of seeing the White House.  People would get in the photo line as soon as they saw it, and wouldn’t get out – even if it meant spending most of the party in line.   Since we couldn’t change human nature, we moved the line to the ground floor and used color-coded tickets so guests would know when it was time to get in line.  Nobody waited in the line for more than ten minutes after that, thanks to the charm and military precision of the White House social aides.

If you’re planning to have a receiving line at an event, here are a couple of things to remember:

1)     Make sure the receiving line is located in an area that allows guests to enter from one place and exit at another.  Ideally, the receiving line should flow into the reception area.  It’s rude to have guests stacked up outside, possibly in unpleasant weather, waiting uncomfortably to go through the line.

2)     The greeters in a receiving line need to be briefed on how to keep the receiving line moving.  This is not the time for a meaningful discussion; it is a moment of greeting, a handshake, maybe an air kiss.   There’s a move that most politicians use to keep things going: the leading handshake.  Grasp the guest’s hand, and while you’re talking, move your clasped hands down the line.  The guest automatically follows his own hand and keeps moving.  If the guest doesn’t get the picture, a dramatically affectionate shoulder squeeze or pat on the back (with adjoining push) will have a similar effect.

On the other side of the receiving line, as a guest, don’t be the person who takes that moment to raise a business proposition or tell a long story.  Remember there are people waiting behind you, and a receiving line is merely a formality.

3)     Have a comment prepared for each person in the receiving line.  “What a beautiful bride you are!” “How great to see you!” “Such a happy day!”  Any positive exclamation gives the host somewhere to start and avoids that awkward moment when your eyes meet and neither of you know what to say.  If you don’t know some of the people you’re greeting, this is a graceful way to say something nice and move on.

4)     Don’t manhandle the hosts.  Try to remember that your hosts are greeting many people, and a succession of crushing handshakes, sloppy kisses and bear hugs can turn a receiving line into a serial case of aggravated assault for them.

6)     If there is a substantial crowd going through the receiving line, it’s nice to have a waiter on standby to offer water to the hosts, as they may become parched after so many greetings.  If there’s an elderly or infirm person in the receiving line acting as a host, it’s wise to have a chair behind them, in case they need to take a breather.

7)     Remember the trick the military honor guards use when they must stand for long periods of time for a ceremony or parade: always bend one knee slightly.  Locked knees for an extended period of time can cause vasovagal syncope (otherwise know as fainting).  You want the day to be memorable for all the right reasons!