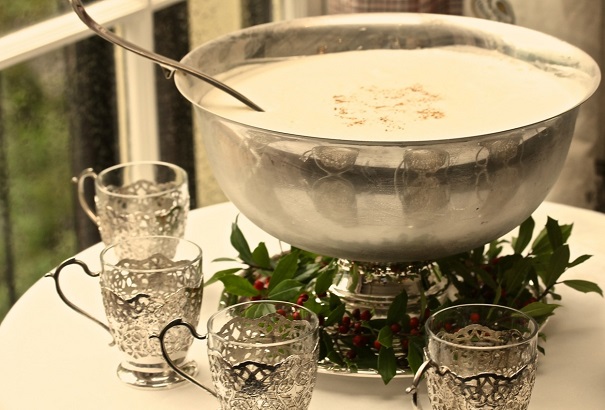 One of the highlights of a White House Christmas party is a cup of the luscious, velvety, high-octane eggnog. If you’ve never had real eggnog, this is the recipe to use. It’s nothing like the stuff that comes in a paper milk carton in the dairy section of the grocery store, which usually ends up tasting more like the milk carton than like the actual beverage. This is a complex mix of alcohols, cream, eggs, and spices – so rich and decadent and satisfying – and just one cup will leave you feeling all warm and Christmas-y inside. There have been many versions of this recipe passed around over the years, and while I cannot say this is THE definitive secret White House Eggnog Recipe, I feel pretty confident about my sources. I love it! The recipe must have grown out of medieval English milk punches, with their exotic mix of ingredients and a healthy dose of spirits. It makes me feel like putting a sprig of holly in my hair and belting out a few choruses of “God Rest Ye Merry Gentlemen.”

I make it every year – even if there’s only one or two people to share it, because it wouldn’t feel like Christmas without it. It’s not for children, and it’s very rich, but that’s why it’s such a special treat at such a special time of year. Notes: Some members of the White House Residence staff recommend making the eggnog days in advance and allowing it to rest in the refrigerator until just before serving, to enrich the flavors. Others have suggested the addition of a pint of eggnog ice cream be placed in the punchbowl and allowed to melt into the eggnog as it’s served. I’ve tried letting the eggnog rest for several days and it was even stronger than a freshly-made batch. Adding eggnog ice cream would be fine, as long as it’s a good eggnog ice cream.

This recipe contains raw eggs and should not be consumed by pregnant women, or anyone whose health could be compromised.